You can put in place a disaster recovery (DR) solution for Solace PubSub+ event brokers using data center replication. Replication provides business continuity and allows mission‑critical applications to continue to function during a major service outage to a data center.

To implement replication, Config-Sync must be enabled for each event broker in a replicated site. Config‑Sync provides automatic synchronization of Message VPN configuration parameters that must match between replicated event brokers. For more information, see Config-Sync Overview. For redundant appliances that are handling Guaranteed Messaging, durable endpoint information such as queue and topic endpoints, topic-to-queue mappings, and queue options are automatically propagated whether Config-Sync is enabled or not.

This section provides a simplified description of how replication works. All diagrams and descriptions are for the synchronous mode of replication, where messages are stored on both sites before responding to the client. For more details about message replication, see Synchronous and Asynchronous Message Replication.

The process of replication can differ depending on whether the guaranteed messages are part of a transaction. There are also differences in how local and XA transactions are handled. 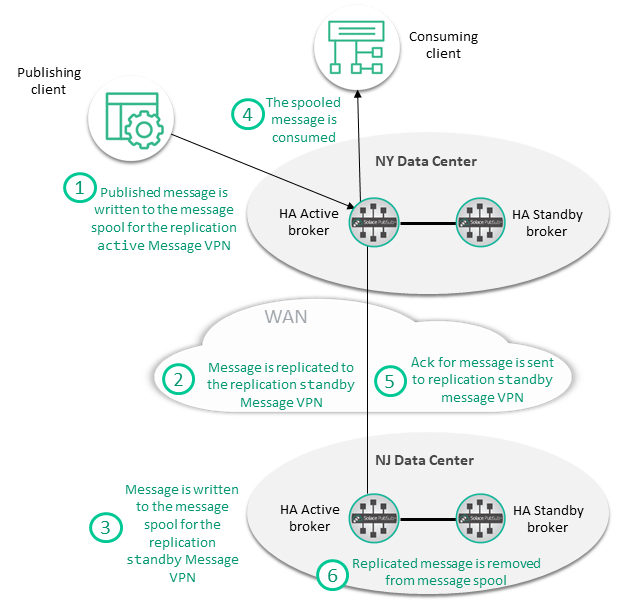 The detailed steps of this process flow (corresponding to the numbers in the diagram) are as follows:

With a local transaction, the messages and acknowledgments are propagated to the replication mate as a part of an internal XA transaction.

For publishing messages in a local transaction, the process flow is as follows:

For consuming messages, the process is as follows:

With an XA transaction, the standby site is included in the distributed transaction.

This the process for publishing messages in an XA transaction:

This is the process for consuming messages in an XA transaction:

Replication can be performed in one of two modes:

Downgrading to Asynchronous When Sync Ineligible

This behavior helps to avoid a business interruption when the standby site is temporarily unreachable.

The replication service is considered degraded when any of the following occurs:

The event broker generates notification events whenever it transitions between synchronous eligible and ineligible (degraded or not degraded).

Switching Service from Site to Site

When using transactions (local and XA), not all transaction states on the active site are mirrored on the replication standby site. Only those states that are necessary to preserve the transactional behaviors on a fail-over are preserved. For example, XA transactions in the ACTIVE state are not mirrored. In the event of a replication fail-over, an application server transaction manager is expected to detect this and will handle it properly.

For procedural information on how to perform replication fail-overs, refer to Switching Replication Service from Site to Site.

The host list feature of the Solace messaging APIs provides messaging clients with ability to automatically switch to a newly active replication site. The host list provides the IP addresses or hostnames of the event brokers in both the replication sites. Typically, the host list contains the primary site, followed by the backup site. When its connection to the primary site drops or is changed to standby state, the client automatically attempts to connect to the backup site, which is the next host in the host list.

When a Message VPN that has a replication active state is switched to replication standby, all active clients are disconnected.

There are four types of replication fail-overs:

In an uncontrolled fail-over, there are some special considerations when failing back to the originally active site.

This is a fail-over triggered by an administrator following the documented procedure. In this case, both sites are in service and can communicate with each other.

In this fail-over type, the active site is out-of-service or isolated from the clients and the standby site for a short duration (minutes, hours). In this case, the standby site can be made active and there is enough capacity in the replication queue (#MSGVPN_REPLICATION_DATA_QUEUE) to store all the replicated messages and transactions (using asynchronous replication) until service or connectivity to the failed site is restored. The recovered site becomes the standby, drains the replication queue (#MSGVPN_REPLICATION_DATA_QUEUE) from the active site, and full replication behavior is restored.

In this fail-over type, the active site is out of service and cannot be recovered (for example the entire event broker has been replaced with a new one). In this case, the standby site can be made active while waiting for a replacement and replicated messages and transactions are stored in the replication queue. Depending on how long it takes to source the replacement, the short-term or long-term outage behaviors will apply.

Failing Back to the Originally Active Site

In all cases of failing back to the originally active site, the risk of message loss or duplication can be eliminated if all replicated messages that were published before the fail-over and that were in-progress during the fail-over have been consumed on the newly active site. In other words, if you leave the backup replication site active long enough to be certain that all messages published prior to the fail-over have been consumed, there will be no message loss.

An example of this type of deployment would be one using a replay server, which is any form of third-party application or solution integrated with PubSub+ that offers replay functionality (in this case, "replay server" does not refer to the Solace Message Replay feature). A replay server must consume all messages so they can be later replayed, and for the purposes of disaster recovery, an instance of the replay server must run on both the active and the standby sites. In the event of a fail-over, the replay server on the standby site will have consumed the same set of messages as the server on the active site and therefore would be able to provide the same replay service.

To enable a replication deployment like this, some extra configuration is required:

Host lists should not be used for a standby client. In this scenario, there should be a client for each site and the clients should only connect to their specific site, so a list of hosts is not needed.

Providing Service at Both Replication Sites

This allows both replication sites to provide messaging services to separate sets of clients. However, they should maintain enough capacity to provide service to all clients of the replication group if there is a planned or unplanned service outage at one of the sites. 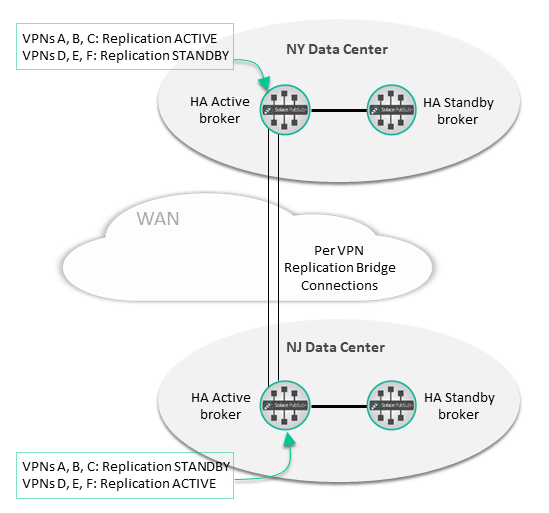 Replication can also be deployed with single event brokers at one or both sites, rather than redundant pairs. However this configuration reduces the fault tolerance of the solution.

You can take advantage of disaster recovery (using replication and Config-Sync) while using Dynamic Message Routing (DMR) to dynamically route messages through your event mesh. DMR provides a means to interconnect instances of Solace PubSub+ event brokers so that messages published by clients hosted by one broker can be consumed by clients hosted on another.

This example topology is illustrated in the following diagram:

Within this fully connected mesh, the brokers are able to determine how messages should be routed. Each node advertises the list of its connected DMR neighbors and replication mates, allowing all nodes to build an accurate internal model of the network. As nodes are added or removed, this same mechanism allows the other nodes to dynamically adjust their internal representation of the DMR network.

Replication mates must be in the same cluster, connected with an internal DMR link.

In this example, no DMR bridge is configured from the Toronto node to New York node for Message VPN Blue.