Solace PubSub+ appliances can operate in high-availability (HA) redundant pairs for fault tolerance. Redundancy provides 1:1 appliance sparing to increase overall service availability. HA redundancy eliminates the potential for a single point of failure by allowing a network administrator to define two appliances as a redundant pair. If one of the appliances is taken out of service or fails, the other appliance automatically takes over responsibility for the clients typically served by the out-of-service appliance.

The redundancy feature is largely transparent to clients and other appliances in the network. Only the two appliances that are paired as mates require explicit configuration to take advantage of the feature.

Similarly, there is no configuration needed on a client host system to take advantage of the HA redundancy facility. The only visible impact to clients during a redundancy failover is non-delivery of messages for a short period of time, and the clients are forced to reconnect.

Solace PubSub+ redundancy models are built around the concept of virtual routers:

Under normal operating conditions, the physical appliance that is active for the primary virtual router handles messaging activity. If that appliance fails, the mate appliance takes over activity for the virtual router.

Active/standby redundancy is supported by Solace PubSub+ for both Guaranteed and Direct Messaging.

In the active/standby model:

Active/active redundancy is supported by the Solace PubSub+ for Direct Messaging.

In the active/active model:

Two variants of the active/active redundancy model can be deployed:

Solace recommends deploying appliances in the active/standby model, for the following reasons:

For an Active/Standby redundant pair

For an Active/Active redundant pair

For an Active/Standby redundant pair

The example immediately below shows a simplified example of the primary and backup IP interfaces and virtual routers used by an active/standby redundant pair. In a failover situation, clients can reconnect to the backup IP interface. 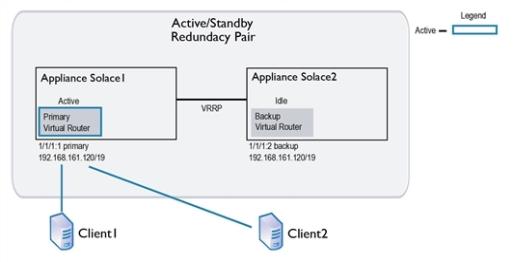 For an Active/Active redundant pair

Below is shown a simplified example of the primary and backup IP interfaces and virtual routers used by an active/active redundant pair, and then the same redundant pair is shown in a failover situation.

An IP number from 1 to 3 indicates the type of IP interface (primary, backup, or static). A typical association is 1 for primary, 2 for backup, and 3 for static, but this is not enforced.

The example shown immediately below shows a physical network topology example for active/standby redundancy when used for Guaranteed Messaging. Only one appliance in the redundant pair (Solace1) receives messages through the primary virtual router. For the other appliance (Solace2), the same virtual router is configured is configured as backup. However, should Solace1 fail, Solace2 will detect the failure and start providing service to the clients that were connected to Solace1.

When active/standby redundancy is used with Guaranteed Messaging, a customer‑supplied external disk storage array is required, and each appliance must have an ADB and an HBA.

The active appliance in an active/standby redundant pair only ever writes to its “read/write” or active partition. In the case of a failover, it provides service for its mate by reading the messages spooled by its mate through the standby partition mounted as “read only”. 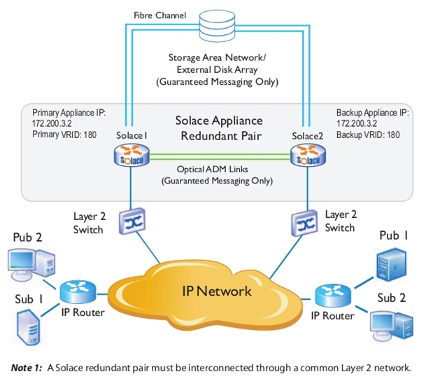 If an appliance detects that its mate is down, it asserts an activity switch on behalf of its mate.

The basic operational activity is:

As shown in the figure of the redundant HA pair immediately above, there are several paths of connectivity between the redundant appliance pair. The redundancy state machines within each appliance monitors the status of the mate appliance through the following communication paths:

An active appliance may decide to voluntarily release activity to the standby appliance by sending a “releasing-activity” indication over all the inter-event broker communication paths. However, to prevent the possibility of paired appliances becoming primary simultaneously and creating a split-brain scenario, the standby appliance does not take activity until it receives a “releasing-activity” indication, or detects a loss of connectivity on all three of the communication paths described above.

Once an appliance has taken activity, it typically does not pro-actively send a “releasing-activity” indication to its mate unless one of the following events occur:

Under some fault conditions, the failing appliance may not always be able to send a “releasing-activity” indication to its mate before restarting. However, such a restart causes an interruption of all three communication paths, which after a debounce time of several seconds on the mate appliance, causes the mate appliance to take activity.

This section discusses the failover sequences that occur for:

The following figure shows an example of an active/active network configuration.

Using this example the following series of operations occur if one of the appliances (Solace2 in this case) goes out of service for any reason:

The figure below shows a common recovery activity switch scenario for an active/active redundant pair, where appliance Solace2 has failed and its mate appliance, Solace1, is acting on behalf of Solace2.

When appliance Solace2 comes back online, the following series of operations occur:

If auto revert is enabled (b), then the following series of operations also occur:

By default auto revert is not enabled, which is preferable for most situations. However, you may want to enable auto revert so that clients revert to their primary appliance as soon as it comes back online when all of the following conditions are met:

For an HA appliance pair that is configured for only Direct Messaging and is running SolOS 8.13.1.38 or SolOS 9.1.1.12 and later, auto-revert behavior may be exhibited under specific network outages where VRRP communication is lost for over three seconds even if the auto-revert option is disabled. This is to prevent the possibility of both appliances entering a split-brain scenario when VRRP communication is lost. For more information, refer to Auto-Revert Behavior of HA Appliances Using Only Direct Messaging.

If Guaranteed Messaging is enabled for the redundant pair, on redundancy switchover the following steps also occur:

Through the auto-revert Redundancy CONFIG command, the network administrator can configure whether the standby appliance in a redundant pair should automatically revert back at this point to the primary when the primary comes back online after a service outage.

In the event that a failover occurs due to any other cause, the auto-revert behavior depends on whether it is enabled. If auto-revert is disabled, the backup appliance remains active after the primary appliance comes back online.

As discussed in Enabling Subscription Export, each Message VPN has a topic subscription export policy associated with it and the default mode is set to not exporting subscriptions.

This is because the topic subscriptions are then maintained within the scope of the appliance, since the Message VPN export policy does not apply between virtual routers hosted on the same appliance.

To avoid this scenario, either:

For details on how to establish Message VPN bridge connections to remote appliances when those remote appliances have been deployed in a redundant configuration to provide fault tolerance, refer to Bridging to Remote Appliances That Use Redundancy.