In technology terms, messaging lets computer systems share information without requiring direct connections or awareness of each others location. Messaging is analogous to postal and shipping services. Just as you would hand letters or packages to a carrier and trust that they will get to where you want them to go, so it is with messaging — your applications hand off information to a messaging system that routes it to whatever other applications it needs to get to.

At its most basic, messaging involves the following participants:

In an event-driven architecture (EDA), a message typically has a destination that separates the publisher from the subscriber. In , a destination is generally a topic endpoint or a queue. Topic endpoints and queues are managed by event brokers.

A message has three parts: Header, Properties, and Body, as shown in the following diagram: 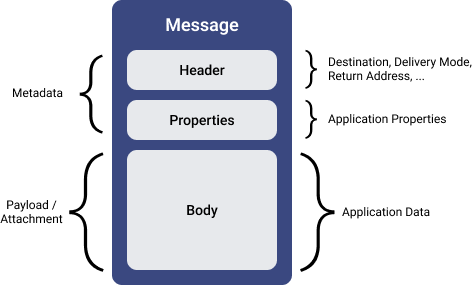 The header is the part of the message used by the event broker for routing messages through the system. Some header fields, such as Destination and Delivery Mode, are required, while others are optional. For example, the reply-to topic is optional, and is only needed for Request-Reply messaging, where the Replier needs to know where to send its responses.

The body of a message is often called the payload, or the attachment. It contains data in an application-specified format, and is transported unmodified by the event broker. The body is made up of raw binary data, or structured data such as text, streams, or maps. Regardless, producers and consumers must agree upon the payload format so that the data can be properly interpreted. Event messages use a schema to define the payload format.

Want to know more about messaging? Move on to Message Exchange Patterns.

Or jump ahead and learn about topics in Understanding Topics.